Register with the Practice 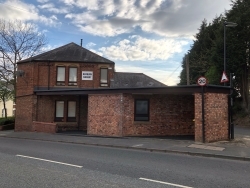 The practice is an end of terrace house that has been extensively modified and extended for use as a surgery. An extension was built for consulting rooms down the side of the building in 1984 and this year we added another downstairs consulting room. There have been various works to improve facilities and the reception area over the years. 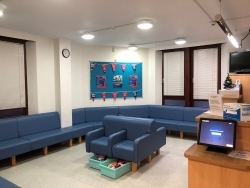 We have been trying to improve our premises for the past fifteen years looking at various schemes for a new building. It has not been possible to do this so we have made the best we can of our Surgery extending over the small parking bay at the front of the building to build another consulting room on the ground floor and redesigning the reception area for greater privacy.

The practice has been a surgery for over 90 years. Constructed around 1895 after the land was bought from Earl Percy by John Spencer and Sons, the building was originally occupied by works foremen. Thomas C Innes, surgeon, is first recorded in 1913, living in 33 Warkworth Crescent. He acquired 4 Newburn Road in 1924 and added a surgery, waiting room and garage where Dr. Gupta's and Dr. Morgan's consulting rooms are now. The doctor lived in the house. The door to the waiting room opened onto the back lane and patients would queue outside.

Later the practice was a branch surgery of the Wylam practice. Dr. Scott joined the Wylam practice in 1981 with a view to taking over the Newburn surgery on Dr. Telfer's retirement. Dr. Mike Scott acquired the premises in 1983. The building was substantially improved and extended in 1984.

Dr. Elspeth Adams came to the practice in 1984. The Drs Julian and Kate Hargreaves joined in 1995, initially working as a job share. The team was completed in 1999 with the arrival of Dr. Firstbrook. Dr Kate Hargreaves moved on to study art at Newcastle University in 2004 and Dr Alison Mattinson joined the practice. Dr. Lorna Carter joined the practice in 2014, taking over from Dr. Firstbrook.  In 2016 Dr Adams retired and was replaced by Dr Sajni Gupta. In December 2018 Dr Mike Scott retired and Dr Ian Morgan joined the team.

The practice was one of the early users of computers. The program for the original computer was written by Dr. Scott's father for a machine with 128 kB of memory costing £3500.

Newburn lies six miles west of Newcastle upon Tyne and was prominent in the early days of the railways. The waggonway connecting the villages to west and east, Wylam and Lemington, was built about 1748. Local men George Stephenson, Timothy Hackworth and William Hedley were pioneers in the harnessing of steam power for colliery haulage. Until 1822 when John Spencer acquired a mill to grind files on the Dewley Burn, employment was mainly for fishermen, keelmen and colliers. Spencers Steel Works rapidly extended to cover much of Newburn and as demand increased for railways and other booming industries Newburn families enjoyed a relatively high standard of living until 1918. The slump after World War 1 had a shattering effect on areas dependent on heavy industry and the Newburn community never really recovered from the closure of the steel works between 1924 and 1926.

In the 1986 Newcastle upon Tyne Household Survey, Newburn was found to be a "small ward with stable population". If people move house half of them stay in the ward itself. The area manages to retain a "village" atmosphere in what is predominantly an industrial environment. Many of the old industrial areas have now been landscaped and reverted to green space. On the edge of the city on the north bank of the river Tyne, Newburn has a country feel to it. The riverside park is a popular destination. There is a leisure centre, water sports on the river, while the riverside route to Wylam is busy with walkers and cyclists.

Map of the location of Newburn on streetmap.co.uk

Convenient frequent services include Stagecoach route 22 which runs every 10 minutes during the day from the Cobalt business park to Throckley and route 71 every 15 minutes from Grainger Street via Chapel House, Walbottle and Newburn to Throckley.

111 is the NHS non-emergency number. It’s fast, easy and free. Call 111 and speak to a highly trained adviser, supported by healthcare professionals.

How likely are you to recommend this Surgery to friends and family if they needed similar care or treatment?  Please spend 2 minutes to take the Friends and Family Test.

The NHS website. Take control of your health and wellbeing. Get medical advice, information about healthcare services and support for a healthy life.

Patient is one of the most trusted medical resources online, supplying evidence based information on a wide range of medical and health topics to patients and health professionals.